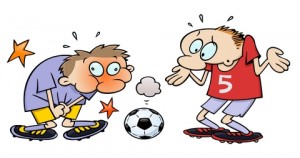 A father looks forward to teaching his son many things, whether it’s the proper way to grill a burger, the best way to a girl’s heart, or how to eat an Oreo without crumbs falling all over the place.

But one thing dads do not look forward to, or at least one thing this dad didn’t think he would have to do when he raised his hand to coach his 7-year-old son’s baseball team a month ago, is show his son how to wear a cup.

And I’m not talking about the kind that holds water. This cup holds, well, you know, the body parts that make boys boys.

The ark of the family jewels. A jockstrap. An athletic cup. Or better yet, a Speedo with a retractable roof.

The thought never occurred to me, probably because I’m not athletic. I played just one season of baseball as a kid, and several seasons of soccer, but I never wore a cup. I guess I was lucky a ball didn’t hit me in the most sensitive of areas all those years ago, so I didn’t think a cup would be a good idea until a parent mentioned it during a practice.

None of the other dads mentioned it to me when I volunteered to coach, which I find puzzling given that they suggested I tell parents to buy a batting helmet in case someone has lice. Isn’t protecting the nether regions of young ball players just as important as preventing a lice outbreak?

But I understand, and don’t blame anyone for the omission. After all, shouldn’t all guys understand the value of a jockstrap? I would think so.

But who wants to talk about them? No one.

And who wants to buy one? Not me.

At least, that thought raced through my mind the other day as I walked into the sporting-goods store to buy one. I didn’t even know where to look, but immediately found myself amid a swarm of golf clubs.

I stopped and looked around. Golfers don’t need cups, do they? I don’t know much about the game, just that players use clubs to hit a small dimpled ball into a cup, but would they need a cup to protect their, well, I won’t finish that thought.

Should I ask someone?

Yeah, that’s a good idea. I don’t want to buy one, so why would I call attention to myself by asking someone where they are? For all I know, maybe the employee is new and didn’t know himself.

The last thing I would want is for him to announce over the store intercom that a customer needs help picking out a jockstrap. I won’t let that happen.

Let me think. It’s for baseball, so it only makes sense that the cups would be near that equipment. Probably near shin guards and catcher’s pads. I find my way over there, and quickly see a wall covered with athletic cups. Hundreds of them.

I had been near that section of the store many times in the previous two weeks, but somehow I missed the near shrine to male athletic protection. Can you say denial?

This should be easy. No one is around. I’ll just pick up one quickly, and be done with it.

Oh, they’re different sizes! So I need to know how big his …??? No, that’s not it. It’s waist size! For the supporter that holds the cup. It’s like underwear.

Red for adults, blue for teens, green for older kids, and yellow for the youngest of athletes. I see. Wait, how big is his waist? I don’t know! Karen buys his clothes.

Oh, this is taking too long. What’s that? Someone is standing next to me. Who is it? Should I look over?

No, just mind your own business. It’s a woman, probably a mother buying a cup for her son like me, and she’s just as embarrassed as I am.

Should I ask her what to buy? No, what if she thinks it’s for me? Great. Where’s the extra large? No, that’s silly. It doesn’t matter who I’m buying it for. It’s no secret that all guys have, well, you know, and that those who play sports should protect them.

Wait, is she going to ask me what to buy? Yeah, that’s what I need right now. Why is buying a cup so embarrassing?

Now, which one should I buy? I still don’t know how big Gavin’s waist is.

Off to the register. Hold the cup discreetly by your side with the back of the package facing out, and maybe no one will see me walking through the store holding an athletic cup.

Wait, maybe I should walk around the store and pick up a few other items. That way, the jockstrap won’t stick out as much. It will just be one of many items in my cart.

Oh, I don’t have a cart, and it’s silly to buy other things I don’t need just to hide something that I can’t hide when I check out.

Why is this so embarrassing? I turn the corner, and see two registers open with just short lines.

Buying a cup is embarrassing enough, but having a woman ring up the sale is the worst. I have no choice. Why is this so embarrassing?

I place the cup on the counter, and pull out my wallet. She won’t even look me in the eye. Why not? Am I some sort of freak for buying a cup?

“Hey!” I want to scream. “I’m not some weirdo. I’m a youth baseball coach buying this cup for his son. There’s nothing wrong with it.” But I say nothing as I swipe my debit card.

“Would you like a bag for this?” she asks.

What a strange question. “No, I’ll just wear it,” I want to say. Instead, I simply shrug and answer, “Sure.”

Good answer, I tell myself, be cool. Act like you don’t care because buying a jockstrap is not a big deal.

Not only do I not want to buy an athletic cup, I don’t want to stand next to a mother while choosing which size was best; I don’t want a woman to ring it up; and I don’t want someone to ask me if I want a bag for it.

Of course, I want a bag! You think I want everyone in the parking lot to see me carrying a jockstrap?

Hours later, after the redness faded from my face, I showed Gavin his new personal shield. His jaw dropped and eyes gaped at the odd-shaped piece of plastic.

“If a ball hits you below the waist, it won’t hurt,” I said. “It might feel a little weird wearing it, but it’s to keep you safe.”

Yeah, like I know how it feels. His eyes gaped wider. “That’s so inappropriate,” he said.

I chuckled, mostly because we have taught our children about privacy. “It’s not, Gavin. It’s for your protection.”

He shrugged, walked away, and I breathed a sigh of relief, secure in the knowledge that I lived through an embarrassing moment for the benefit of my child.

Ah, the joys of fatherhood.

Oh, and that trick about the Oreos? Just stuff the whole cookie in your mouth, and you won’t lose a single crumb. But don’t tell your mother I told you.

This entry was posted in Blog and tagged Baseball, Youth Sports. Bookmark the permalink.

2 Responses to It’s just a cup. No big deal, right?