Dibs is serious business these days 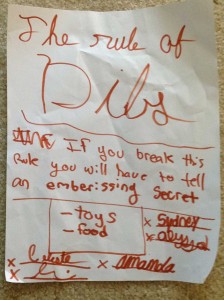 Dibs has turned into serious business since I was a kid.

I remember well calling dibs on the front seat of the car, or at worst the window seat in the back, so I wouldn’t have bend my knees up to my ears because of the hump in the middle.

All you had to do was call dibs before you touched the car and the seat was yours. No one argued it, and no one appealed it (even if Mom would have heard such an appeal, which I doubt). If you weren’t fast enough, you would just try to be faster next time.

No one quetioned the call. We respected each other’s right to dibs.

But it seems few kids respect dibs these days, at least not without some form of punishment for those who break the Rule of Dibs.

My 10-year-old daughter Celeste and her friends have even formalized the rule in a kid-styled contract.

The rule only formally applies to toys and food, though Celeste told me it also applies to spots, which is particularly important on movie night. What kid, or adult for that matter, doesn’t want a clear view of the TV?

And though the contract doesn’t specify what the rule is, Celeste assured me that kids understand know it: If you call dibs on a toy, food or spot, it is yours.

If you break the rule and take someone else’s toy, food or spot, you’d have to tell your friends something embarrassing about yourself.

I asked Celeste if anyone has broken the rule, and to my amazement no one has. “No one wants to tell everyone else something embarrassing about themselves,” she said simply.

Serious business indeed. It might simplify our legal system, though. These kids could be onto something.

This entry was posted in Blog and tagged Celeste. Bookmark the permalink.

1 Response to Dibs is serious business these days