A testament to engaged fatherhood

I’ve never doubted the love a father can feel for his children. 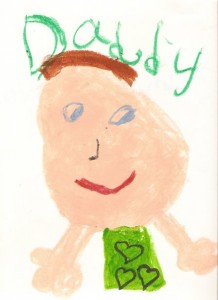 A portrait of me by Celeste.

I felt it when Celeste came screaming into my life nearly 11 years ago, and again when Gavin followed a few years later.

And I was reminded of it Sunday by a column in The Washington Post from T.J. Leyden, a father who left behind the hate-filled world of white supremacy because he wanted something better for his young children. He now spends his time making amends for 15 years of living a life of hate by talking to kids about his experience with the hope they do not enter that world of violence and racism.

His piece is a timely reaction to the shooting at the Wisconsin Sikh temple in which six people were killed by a man who shared the beliefs Leyden once held.

Leyden even asks if his former self could have committed such an act, if he could have been the shooter. “It makes me sick to say that I don’t know,” he wrote.

But Leyden escaped that world. As he explains in his story, the love he felt for his children overpowered the sense of belonging he felt in a world of hate. He wanted a better life for his children, so he turned his around.

I love Leyden’s story because he acknowledges the effect his children have on his life and he was willing to write about it in a prominent American newspaper. Few men choose to express themselves in a brave testament to the power of fatherhood. The world needs more dads who are willing to put themselves out there and share their stories of engaged fatherhood, and how children have affected their lives in a positive way.

And such a project is under way.

Dads Behaving Dadly is a project by two editors and fathers who are chronicling the fatherhood revolution by asking engaged fathers in America and Canada to share their stories. They want to put them together in a book to celebrate engaged fatherhood.

Their goals are worthy:

If you think you might have a story you’d like to tell, I encourage you to submit it for their consideration. I did, and they liked it enough to include it. Which story you ask? I’m not telling. You’ll have to wait to see if it makes the final cut then buy the book.

This entry was posted in Blog and tagged Dads Behaving Dadly, Engaged fatherhood. Bookmark the permalink.