I love listening to Hair Nation on SiriusXM. I realize none of the music is original and the bands that fill its airwaves are better known for breaking laws and hotel lamps than musical barriers, but that’s not the point. 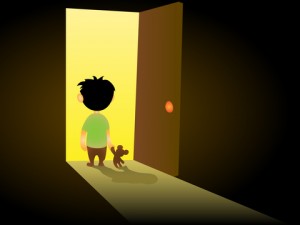 The songs I hear while visiting the land of Aqua Net and Spandex take me back to my younger days in the 1980s when life seemed so much simpler. A random Van Halen song often reminds me of hanging out with friends in the parking lot of the neighborhood Pizza Hut and melts away whatever stress I felt that day.

Memories are funny that way.

Anything can trigger them, whether it be a song, a smell, or a few words from a 6-year-old boy. In the instant a memory is triggered, we sometimes relive a day from decades ago in vivid detail and feel the emotions again as though they were new.

Other times the trigger reanimates just the outline of a memory’s shadow, and leaves you with a vague impression of a life-changing event.

That happened to me the other night as I was putting my 6-year-old son, Gavin, to bed. Karen had taken our 10-year-old daughter, Celeste, to New York for a girls’ weekend of “Mary Poppins,” shopping, and more.

That meant it was just Gavin and me for few days, and I planned to make the most of my time alone with him. Gavin’s mood ranged from good to melancholy, and it reached the bottom one night when he burst into tears without warning.

“I miss Mommy and Celeste!” he cried.

“I know that, but we’re supposed to be together! I want the family together,” he whined. “Me, you, Mommy, Celeste, and Obi. That’s the family.” (Obi is our cat.)

Gavin’s words struck me as surprisingly poignant for a 6-year-old, and choked me up because they triggered the impression of an echo bouncing around a memory I have involving my parents’ divorce and growing up fatherless.

My father left my mother and her four children when I was about Gavin’s age. It’s no understatement to say it was one of the defining moments of my life, and set me on a path of growing up fatherless.

I remember moments of days growing up with a single parent, and the difficulties my mother had in maintaining a healthy household, both financially and emotionally. But I have no actual memory of learning about my parents’ divorce, or my reaction to my family no longer being whole.

Was I stoic? Did I shrug, and simply accept as fact that families in the 1970s were destined for divorce? Could I even articulate what I felt?

But they are obviously a part of me. Otherwise, Gavin’s reaction would not have affected me so much or rung so true.

I don’t think about my parents’ divorce every day. It’s simply become a piece of the fabric that makes me who I am. I’ve learned to live with it, much as an amputee must learn to live without a limb.

But fleeting thoughts of it enter my mind as I father my two children. I think of it more as Gavin reaches the age I was when my father left, and it stops me cold. I see the way he looks at, and up to, me.

The adulation in his eyes is as pure as the sun’s rays warming my face on a spring afternoon. I wonder if I ever looked up to my father that way, but I have no clue. No trigger has ever brought back such a memory. All I remember is absence, weekend visits, greeting cards, and phone calls.

I never thought I could remember so much, and yet so little, or feel so many complex emotions in the short time it took me to console my son that night. But that’s the floodgate his words tore open: “I want the family together. Me, you, Mommy, Celeste, and Obi. That’s the family.”

“We’ll all be together again in just a few days,” I told him. “You don’t have to worry about that.”

I’m frustrated I can’t remember more from my childhood, but perhaps I’ve been listening to the wrong music. Instead of driving around with cheesy, ’80s guitar riffs spewing from my speakers, I need to switch to the acoustic sounds of ’70s AM radio.

But I’d rather spend time with my son and soak up the adulation from his eyes.

This entry was posted in Blog and tagged Fatherlessness, Gavin. Bookmark the permalink.