I take Celeste and Gavin to the library once a month or so, and allow them to borrow up to two videos each and as many books as they’d like. 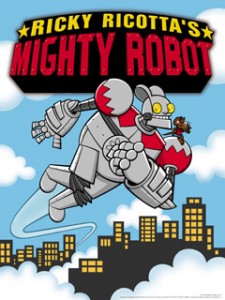 This arrangement has worked out well given that we never lost a book. Then “Ricky Ricotta’s Mighty Robot” came into our lives, and challenged Gavin to a wicked game of hide and seek.

We didn’t even know the game started until we were at the library checking out the latest round of books. The librarian told us that we couldn’t borrow the books until we paid the fine for the overdue Ricky.

I paid the fine, and renewed the book for three weeks so Gavin could search the house for the elusive Ricky. He started the minute we arrived home. He looked in his book bag. Nothing. He went upstairs to search his bedroom. Zip. He looked in the living room. Empty.

He looked in the basement, the office, the family room, the car. All for naught. Everywhere Gavin looked, Ricky Ricotta remained a step ahead.

“You know what this means, right, Gavin?” I asked.

“That’s right. And what does that mean?”

He thought about it for a moment. “That I have to pay for it.”

“How much does it cost?”

“OK,” he mumbled and walked away.

I can’t remember if Gavin responded or not, but Ricky Ricotta remained hidden for the next three weeks. The library emailed me a reminder a few days before Ricky’s due date, so I asked Gavin if he had any luck finding him. He didn’t.

I couldn’t stifle my belly laugh. “That’s a good one, Gavin. Why would I pay anything, let alone more than you, when you’re the one responsible for the book?”

“Because you’re the daddy.”

Another belly laugh. “Nice try, Gavin, but it’s not going to work. You have to pay the full cost of the book.”

Ricky’s due date came, so I told Gavin to collect his money to pay for the lost book. He dutifully went to his bedroom, took his piggybank down from this dresser, and emptied it on the floor.

Gavin counted more than $6 in change, which I traded for some singles, and we went to the library. He was silent on the five-minute drive, and solemn as we walked up to the librarian, his head bowed down to the ground and his hands stuffed in his pockets.

“Hello,” I said to the librarian. “He needs to pay for a book he lost.”

Gavin put his $6 on the desk without saying a word.

“Well, why don’t I check for you? Sometimes books are placed back on the shelf without being checked back in.” She looked up our account, wrote the title of the book on a piece of paper, and walked back to the juvenile fiction section.

“I can show her where it is,” Gavin said. “I know right where it’s supposed to be.”

“Yeah, but then what happens to the money?”

Gavin glowed with anticipation at the thought of keeping the $6, as though he had just won the lottery and was dreaming about how many sports cars he could buy.

A moment later, the librarian walked back to the desk with Ricky Ricotta firmly in her hand. “Always ask us to check,” she said. “It doesn’t happen a lot, but it’s always worth checking first.”

Gavin nearly skipped his way back to the car. “I have $6,” he said proudly.

“I don’t know, maybe buy a DS game with it or something.”

“You can do that, but you know what, Gavin? I’m really proud of you.”

“Because you took responsibility for losing the book.”

“That doesn’t matter. You were willing to accept that you lost it. You counted your money without complaining, and you came here with me to pay the fine without crying.”

“I could tell, but you didn’t let your nerves get the best of you. You did the right thing even though you were nervous about it.”

“So what did you learn?”

“Um, to take responsibility for things?”

“Sure, even though you didn’t. Anything else?”

He thought about it a moment then shrugged.

“That Ricky Ricotta plays a mean game of hide and seek,” I said.

This entry was posted in Blog and tagged Gavin, Responsibility. Bookmark the permalink.