A stray cat crosses our path 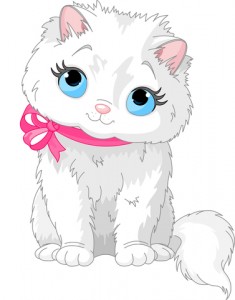 I always try to be a better person when my children are near. Not that I’m a bad guy when I’m alone, but it’s easier to jaywalk when my kids aren’t around.

Perhaps that’s why we went out of our way last week to help a stray cat that crossed our path when we were at the playground. I looked across the field and saw a white cat sitting at the edge of the brush that separates the neighborhood from an adjacent lake.

He was just sitting there watching us from afar. My 10-year-old daughter Celeste loves cats, so I pointed him out to her and Gavin, my 7-year-old son.

I told her to stay put as I walked over to check on the cat and to see if his demeanor would allow Celeste to pet him. He came right up to me and rubbed himself against my legs, so I knew it would be safe for her.

I could tell he had been outside for some time. He was dirty and ungroomed, classic signs of a stray cat, but he must have been someone’s pet at some point because he was so friendly.

I would have been content to pet him for a few minutes and leave him alone, but Celeste was not. She worried about the little guy (could have been a girl; I didn’t check), and wanted to do something to help him.

Taking him home was out of the question. We already have two cats, and bringing in a stray puts them at risk at catching any diseases he might have.

Besides, we were not going to adopt a third cat.

I didn’t think we could do anything. He didn’t have a collar, so we had no phone number to call.

It was well after dinner, so I was fairly certain the animal shelter was closed. And given that we were half a mile from our house, I didn’t want to walk back just to check.

Besides, for all I knew, the cat would run away two minutes after I started walking home. Who wanted to go through all that? Not me.

“But we have to do something, Daddy,” Celeste pleaded. “Why don’t you go home and check?”

Karen and I exchanged a look. We both knew Celeste was right, but we also knew we could do little.

“Tell you what, I’ll walk home, call the shelter, and if they’re open, I’ll drive back with a carrier. If not, I’ll just have a can of food for him.”

Celeste smiled. I hurried home, called the shelter (it was closed), and drove back with a can of food. To my amazement, the cat was still there with Karen and the kids, and he scarfed down the food.

We decided to return the next day with a carrier in case he was still around, but I was clear with the kids.

“We are not going to adopt a third cat,” I told them (and myself, if I’m entirely honest.)

We tried to find him twice the next day, but had no luck. We’ve since given up finding the little guy. At first I thought we just wasted our time, but after thinking about it for a few moments I know we didn’t.

The next time Celeste and Gavin come across an animal (or anyone, for that matter) who needs help, I’m sure they will offer what they can. I just hope they don’t bring home a third cat.

This entry was posted in Blog and tagged Animals, Cats, Celeste. Bookmark the permalink.