Striking out is just part of the game 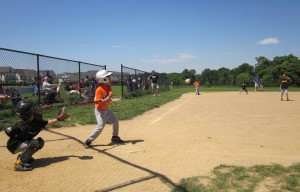 Gavin swings at a pitch during the last game of the season.

I love watching my children change as they grow.

While I’m as wistful as the next dad to see my kids’ former favorite toys languishing in the back of the closet, and I wish they could wear their shoes longer than they do, I find great joy in seeing them heed the lessons Karen and I work hard to teach them.

Gavin, our 7-year-old son, is starting to pick up what it means to lose well, which stands in stark contrast to his 5-year-old self.

The Gavin of 2010 who would stomp away from any game he lost and throw down a baseball bat if he couldn’t hit the ball off the tee like he thought he should.

The Gavin of 2012 walks away from the plate after striking out with his head held high, and doesn’t throw a tantrum when he reaches the bench.

Such a reaction was one of my silent fears when I signed him up for baseball this spring and volunteered to coach his team. My mind replayed images of Gavin sulking every time he didn’t reach first base, either because of a strikeout or grounder, and me trying to console him while also coaching the other players.

That’s a lot of consoling given three or four at-bats per game, especially given the fact that I often was the dad on the mound feeding baseballs into the pitching machine.

But my fear never came true.

Every time he struck out, he simply walked back to the bench without shedding a tear and joined his teammates with his head held high.

I’d like to take credit for his evolution, but I doubt I’m responsible. I think he saw other kids strike out, and realized he wasn’t the only one who had difficulty in hitting the ball.

In that sense, Gavin is much more advanced than I was when I played my one season of baseball as a kid. I dreaded stepping up to the plate because I struck out just about every time and I prayed the ball never came to me in the outfield.

My team won the trophy that year, but I felt as though I contributed nothing to it.

In contrast, Gavin played in a division that did not keep score, so the point was to teach the kids some fundamentals of the game in a non-competitive atmosphere.

To be sure, Gavin played better at the end of the season than he did at the beginning, but the most important lesson he learned was not where to throw the ball when runners are on second and third.

The most important lesson was that striking out in baseball, as in life, is merely part of the game and not worth shedding a tear over.

This entry was posted in Blog and tagged Baseball, Gavin, Losing. Bookmark the permalink.