A father’s lesson in allowance

I love hearing the perspectives of other parents and how they teach their children life lessons.

Take money as an example. 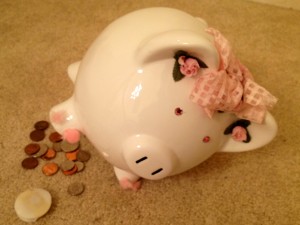 A couple of years ago we decided to start teaching our then 9-year-old daughter Celeste about money. She wanted a Nintendo DS, but we wanted her to work for it, so she could appreciate the cost. (You can read about it here.)

A father I spoke with the other day took a different path to teach his son and money. I’ll call him Rob because, well, that’s what his parents named him.

Rob figured the time had come to teach his 6-year-old son about money, so he started paying him $7 a week as long as he did his chores. It worked well.

Junior, which is not his real name, was faithfully doing his chores and earning $7 a week. The only problem was that he wanted to go to Target the minute the money touched his hands. He’d burn through his allowance faster than I eat a bag of Hershey’s Kisses. (That’s pretty fast. Ask Celeste.)

So Rob tweaked his plan. “I wanted to teach him about saving money, so I started paying him 10 percent interest,” he said.

His plan worked at first. Junior wasn’t spending a dime, and after some time was amassing quite the savings for a young boy. Nearly $40.

“Don’t you want to buy something?” Rob asked his son one day.

“Because at 10 percent interest I’ll earn $7 a week without doing any chores,” Junior said.

Rob cut his interest rate to 3 percent, but you have to admire Junior. Perhaps I should pick his brains for ways to lighten my workload.

This entry was posted in Blog and tagged Allowance, Celeste, Money. Bookmark the permalink.