Teaching children the value of money

Celeste has a wonderful innocence about money.

She knows what it is, of course, and that her mother and I work to earn it, but she has not fully developed the concept of the value of a dollar. 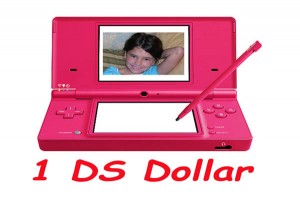 Celeste earns one of these, a DS dollar, for doing extra chores around the house.

She’s beginning to understand, though. For her birthday last year, she wanted an American Girl Doll. Karen and I had no intention of spending $100 on one doll, no matter how much we treasure our only daughter, but we wanted her to fully understand why.

We told her we could buy her the doll, but that would be her only gift and it wouldn’t come with any accessories. No extra clothes ($30), no furniture (who would pay $85 for a doll bed?), no baby stroller ($40). I don’t like spending $30 on a shirt for me, so I’m not about to spend that much on a doll.

If we bought an American Girl Doll for Celeste, that would be it, period. Or we could buy her an Our Generation Doll from Target ($30), a boatload of accessories (about $20 per packet), and some other gifts.

A trained eye could probably tell the difference between the two dolls, but I can’t and neither can Celeste. Nor does she care. She has more toys to play with for the same amount of money. That’s the value of a dollar.

When her 9th birthday came around last month, we asked Celeste what toys she would like to have as her presents. She answered without much hesitation: Nintendo DS, the handheld computer game that is all the rage among those who have lifetime memberships to the Justin Bieber fan club.

I admit the kid inside me is a little jealous because the handheld computer games I played with as a kid were a joke compared to today’s models. I remember spending many rainy Saturday afternoons taking turns with my friends and brothers playing a Mattel Electronics handheld computer football game. The screen was tiny, and it had just a few buttons that we pressed to direct little lines where to run on the field. The lines were supposed to be the players, but they more resembled little pieces of red rice that carried about like ants looking for their next meal.

I loved that game, and we would pretend to be real NFL teams squaring off in the Super Bowl. We even had little football helmets from 25-cent gumball machines to represent the teams. I’m sure the computer power it took to run that game would fit on the head of a pin today.

Karen and I have resisted buying Celeste a DS, but we are not surprised she wants one judging by the numbers of kids who have one. Part of the reason we have not bought her a DS is because of its passive nature of play. Kids today don’t need another toy that requires them to sit around and stare at a small screen. They need to move around, sweat, and get dirty.

Another reason we have resisted is the cost. The unit itself costs between $130 and $170, depending on the number of bells and whistles. It comes with a few basic games, but the ones kids really want to play are about $25 to $35 each. That’s birthday, Christmas and Valentine’s Day wrapped up in one little box there.

So when Celeste said she wanted a Nintendo DS for her birthday, Karen asked if she knew how much they cost. Celeste looked at her innocently (she has no other look, mind you) and said, “I don’t know, about $10.”

Celeste’s eyes widened as she quickly realized that we were not buying her a Nintendo DS for her birthday. “Oh,” she simply said, and didn’t ask about it again.

I’m proud she understands how expensive that toy is, but after thinking about it for a bit, I also realized she could learn another important lesson: pride in earning something.

So Karen and I decided she could work toward earning her Nintendo DS by helping around the house more than normal. I would pay her a dollar or two every time she helped me in the yard or garden or to clean up the basement, and she could save that money for her expensive toy.

But I didn’t want to keep small bills lying around the house. I find that I spend less money if I don’t carry it around, so I hardly ever have cash on me.

Instead, I created a “DS dollar.” I found a Web image of a Nintendo DS, and superimposed Celeste’s face on its screen. I can fit eight of them on a regular sheet of paper out of our printer, so whenever I feel she earned a DS dollar, I cut one out and give it to her.

When she’s earned 20 of them, I’ll exchange them for a real $20, and when she’s earned enough to buy a Nintendo DS, she can buy it with money she earned. At the rate she’s going, she’ll have that Nintendo DS by the time she’s married. OK, not that long, but it won’t be quick.

Of course, once Celeste earns her DS, we’ll have to limit the amount of time she spends on it, but she will have learned the value of working for something she wants. Not a bad trade off, especially if I can sneak in a game every now and then.

This is a re-post of a column that appeared in The Gazette on Oct. 7, 2010. Celeste has since earned her DS, as has her younger brother, Gavin. They both worked hard to earn it, and neither has not lost it (much to my surprise).

This entry was posted in Blog and tagged Allowance, Celeste, Gazette, Money. Bookmark the permalink.