A summer lesson in what to expect

I don’t expect my cat to bark.

When I look at Obi, I expect him to stare blankly back at me as if he were about to say, “Yeah, you think you’re the man of the house, but we all know it’s me. Now go clean my litter box.”

At least, part of me thinks that’s what he thinks when he looks at me, but I don’t expect him to do anything beyond meow softly and go back to sleep. He might squint his eyes at me, but he just as likely might not. 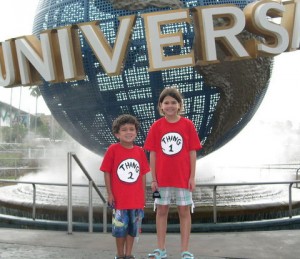 Universal Studios was a universal flop for both Celeste and Gavin three years ago.

Either way, I don’t expect Obi to be anything other than a 12-year-old house cat who sleeps most of the day and paws at me in the middle of the night if I leave the bedroom door open.

I mention this to remind myself that I need to have reasonable expectations of people, including children and especially mine. After all, I don’t expect my cat to bark, so why should I expect my children to be anyone other than who they are or to like anything they don’t?

Karen and I took the kids to Universal Studios in Florida last month, and I expected them to love it.

Both places are tailored for families, so if they liked one, why wouldn’t they like the other? They found plenty of reasons.

Celeste and Gavin were underwhelmed by the attractions at Universal Studios, and ready to flee the parks for the hotel swimming pool by 2 p.m. each of the three days we were there. I was as disappointed in their lack of enthusiasm for the parks as they were in the parks, but I can blame no one but me.

I expected them to like it, and they did not meet my expectations.

They didn’t ask to go to Universal Studios. Karen and I chose it for them largely because of the new Harry Potter world that just opened. We have read only the first book to them and they have seen only the first movie, but I still expected them to be awed by walking through the castle at Hogwarts and the streets of Hogsmeade.

How couldn’t they? Children the world over love Harry Potter.

I knew they wouldn’t be able to go on every ride — Gavin isn’t tall enough and Celeste hasn’t graduated beyond small roller coasters — but I still figured they would enjoy it. I expected them to, if only because Karen and I enjoy it so much.

But Celeste found the images in the movie that is part of the main new ride, Harry Potter and the Forbidden Journey, too scary and didn’t want to give it a second go. And Gavin didn’t like the sounds he heard (the voice of Hagrid, mainly) walking through the woods to ride the Flight of the Hippogriff, a small roller coaster perfect for young children.

As a result, we could not fully enjoy the new world of Harry Potter. In fact, if it weren’t for the five or six attractions in Seuss Landing, a corner of the park revolving around the world created by Dr. Seuss, the whole trip would have just been an expensive jaunt to a hotel swimming pool in Florida.

I don’t blame the children, of course, but my own expectations of them and how they would define a fun trip. As they grow older, I’ll need to keep my expectations in check to ensure I don’t look for either of them to solve the puzzle of the cosmos for their seventh-grade science project or hit that grand slam in the bottom of the ninth to win the game.

Expecting that much can lead to disappointment, which they could interpret as me thinking they are a failure when nothing could be further from the truth. I’ll need to find the right balance between accepting too little and expecting too much, for in that sweet spot of parenthood grows well-adjusted children.

But for now, I need to remember that they can have a blast by spending an hour drawing faces on balloons and chasing each other around the house with them.
And that I don’t expect my cat to bark.

This is a repost of a column that ran in The Gazette on Sept. 9, 2010. Obi died last year, and we adopted two other cats, Clover and Mario, neither of whom I expect to bark. Both Celeste and Gavin have also since seen all the Harry Potter movies (we skipped the scariest parts), and love them all. But we’re still not returning to Universal Studios. Turns out we’re a Disney World family.

This entry was posted in Blog and tagged Celeste, Gavin, Gazette. Bookmark the permalink.

1 Response to A summer lesson in what to expect