For fathers in youth sports, lessons extend beyond the field

I’m fairly new to the world of fathers in youth sports.

Both of my children have played on soccer, basketball or baseball teams, but none have been competitive. They have all been recreational, so kids simply sign up and all can play regardless of their skill level. 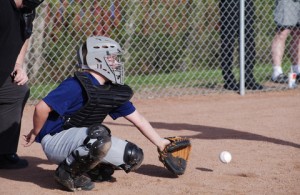 That’s how I like it given the age of my children. At 7 and 11 years old, it’s more important for Gavin and Celeste to learn the basics of the games they are playing than worry about who’s winning or losing.

They even learn skills that are useful off the field.

They learn not to give a teammate a hard time for dropping the ball because they once dropped it themselves or could just as easily drop it the next time it comes to them. Whether on the  baseball diamond or in the office, everyone makes mistakes.

They learn that being part of a team means you have to sometimes pass the ball so your teammate can score the goal. Whether on the soccer field or in the workplace, no one accomplishes anything on their own.

And they learn to not fear losing. Whether on a math test or in the boardroom, failure is often a stepping stone to the next success.

A lesson for fathers in youth sports

I find that I learn just as much, though it’s not from my children or their teammates. I often walk away from a game or practice thinking more deeply about my role as a dad and how I father my children by watching other fathers in youth sports.

For example, one day I saw a father argue with his son about the way he was playing catcher. The son would not keep his right hand behind his back to protect it. One foul tip at just the right angle could break his throwing hand. (Look at the picture on this post to see where a catcher is supposed to keep this throwing hand.)

The father walked away in frustration, and mumbled, “Fine with me. Let him break his hand and learn the hard way,” or something to that effect.

My first thought was, “What a jerk. What father in his right mind would allow his son to put himself in harm’s way?”

I walked away from that game questioning the behavior of some fathers in youth sports and feeling sorry for the boy. He doesn’t have a dad who cared enough about him to protect him from hurting himself.

Too quick to judge

But after giving it more thought, I realized I was in no position to judge this father based on one five-second exchange with his son.

I’ve certainly had my moments of frustration with my children, and I wouldn’t want someone judging my skills as a father based on those moments.

After all, it’s not like the boy was playing with a sharp knife or a loaded gun. He was wearing all the protective gear catchers wear. He just wouldn’t put his right hand behind his back. What are the chances he would actually break his hand on a foul tip? Slim, I’m sure, given this level of play.

Sometimes kids have to learn on their own. No doubt I’ve learned more from my own mistakes and my own pain than through anything my mother ever tried to tell me.

But where is the line? And how far would you let your children risk their own safety?

This entry was posted in Blog and tagged Baseball, Youth Sports. Bookmark the permalink.