Be the dad your child deserves on Father’s Day 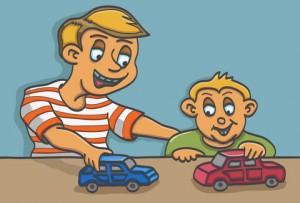 I want to write about all the great Father’s Days of my youth.

I want you to laugh with me as I retell the story of the time I spilled a bowl full of ice-cream sprinkles all over the floor while making a banana split for my father in 1977 and raced to clean up the mess before anyone noticed.

I want you to cry with me as you read about the disappointment I felt a year later when I left the clay bowl I made for him at day camp, and had no present to give him that Sunday.

And I want you to smile with me as I tell you about all the old photographs of family barbecues with Dad shamelessly wearing his “Kiss the Cook” apron, and demanding everyone (including the hairy next-door neighbor) obey the order if they wanted a burger.

Believe me, I want to tell those stories.

None of it happened. My father left my family when I was 7 years old, and I have no memory of any Father’s Day growing up. While many people see the third Sunday in June as a day to honor their father, I saw it as just another Sunday, one on which I would send a card and make a phone call.

That was it. No barbecues. No fancy luncheons. No anything.

To be fair, I have no memory of Mother’s Day celebrations growing up either, but I don’t blame my mom. She was too busy raising four children on her own to arrange an outing in her honor. Besides, that would be weird. Helping young children honor their mother is a father’s job, and mine wasn’t there.

So I don’t know how I’m supposed to feel on Father’s Day, in part because I have no experience on which to base any expectations.

Many people pay tribute to their dads on Father’s Day by either changing their Facebook profile picture to him or simply saying what he meant in their lives.

I can’t do the same. How could I honor a man who wasn’t around?

I don’t look for adulation or affirmation. My children give me everything I need when they run full throttle into me when I arrive home from work or they proudly show me a picture they drew at school.

The former means they miss me when I work late, want me home, and like playing with me. I play with them whenever I can.

The latter means my opinion matters to them, and they want me to be proud of what they create. I always am.

So I see Father’s Day not as a time for children to celebrate the men who fathered them, but for the men who are fathers to be the dad their children deserve to have.

Now go play a silly game with your children, take them for a ride through the park, toss around the football, and give them a kiss. Tell them I said hi.

This entry was posted in Blog and tagged Father's Day, Fatherlessness. Bookmark the permalink.