Scary is in the eye of the fearful 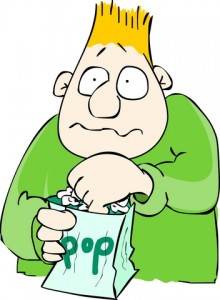 I clearly remember waiting in long lines to see “Star Wars” in the summer of ’77.

Only 8 at the time, I watched the silver screen in awe as the androids, aliens and humans told a story that ignited my imagination. But it is also the first movie that ever scared me, so much so that the scene remains seared in my memory 33 years later.

Not far into the movie, R2-D2 runs away from Luke Skywalker to find Obi-Wan Kenobi and give him a message from Princess Leia. Luke takes C-3PO to look for him, but it’s late in the afternoon and he’s worried about the Sand People, a race of brutal scavengers.

I had no idea who the Sand People were, but if the hero of the movie says they’re the worst in the galaxy, my 8-year-old self tended to believe him, and wanted Luke to avoid them at all costs.

As Luke looks through binoculars, he tells Threepio that he can see signs of the Sand People down in a valley, but doesn’t seem overly worried. His reaction eased the fear I felt for him.

Then one of the Sand People jumps up unexpectedly in Luke’s field of vision, bellows out an ear-splitting scream as though he were an angry mama mammoth looking for her babies and knocks Luke to the ground.

The face of that angry Sand Person (People? Dude? Whatever.) raising a stick in triumph over Luke’s body and bellowing out loud repeatedly terrified me like no other image before.

I can see the movie now and smile at the benign nature of that scene, but my 8-year-old self did not have the luxury of an adulthood lens through which to watch the movie.

The Sand People did not injure Luke, and he went on to destroy the Death Star and save the galaxy from the evil clutches of the Galactic Empire! (Until the sequels, of course, but those were unheard of in the 1970s, so it seemed at the time like Luke was the greatest hero of all time, bar none.)

I have to remind myself of that scene periodically to remember that adults and children see movies through different eyes. What seems benign to an adult can terrify a child.

Gavin, my 5-year-old, could not make it 10 minutes into “Wall-E” before he ran screaming from the living room. A rocket ship was landing and it scared Wall-E terribly, which in turn scared Gavin. It wasn’t a bad scene, but Gavin felt unique empathy for that rusted robot and experienced the same fear as Wall-E. He did not want to watch the rest of the movie, which was fine with me.

He could not wait for “Toy Story 3” to open this summer, and neither could I. The first two movies are good, not just for children but adults as well because the stories have a great deal of depth to them.

We heard some warnings about scary parts in it, but I shrugged them off, even though I know how sensitive Gavin can be. He did not like the barking dogs in “Up,” but this was “Toy Story 3.” Neither of the first two movies scared Gavin, so I did not believe the third would.

Plus, we had already read the picture book, so we were familiar with the story. It seemed harmless enough. How scary could the movie be?

Turns out a couple of scenes and characters scared Gavin terribly: the watch-guard monkey, Lotso, and the extended incinerator scene that almost destroyed all his favorite characters.

If you’ve seen the movie, I’m sure you know which scenes I’m talking about, but please forgive me if you haven’t. The details of each would take too long to explain, but take me at my word when I say that each genuinely scared Gavin.

He’s had trouble sleeping several nights since because of bad dreams, though he can’t articulate what is so scary. He’s even collected some toys he no longer wants to play with because they are too scary, though I see them as tame.

He wants me to throw them away, but I’ll just hide them for the time being because he will grow out of these fears and will one day want these toys again. When he was collecting the toys, he kept apologizing and saying how he just didn’t want to play with scary toys.

I told him he had done nothing for which he should apologize. “Life’s too short to play with scary toys,” I told him.

“I just want to be big and brave, like you Daddy,” he responded, to which I only smiled.

Part of me wanted to tell him that I only seem brave to his 5-year-old intellect, and that my worst fears would only play out in real life and involve harm to him or other members of my family. But I would never want to burden him with the possibility of real-life tragedies.

For now I’ll let my boy believe I have no fear. After all, it won’t be long before he believes I have no sense, and for the time being, he needs a brave dad to call for when his dreams scare him.

This entry was posted in Blog and tagged Gavin, Gazette, Movies. Bookmark the permalink.