Vet sticker shock sets me on a path toward feline dentistry

I’ve never brushed my cat’s teeth, but I’m about to become a self-taught expert in feline dentistry. 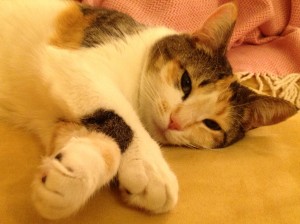 How hard will it be to brush Clover’s teeth? I’m going to find out.

You see, I took our 18-month-old cat Clover to the vet recently, and it seems she doesn’t take care of her teeth like she should. She has tartar buildup that would frustrate the best dental hygienist, and her gums are showing early signs of gingivitis despite the dental food we give her.

The only way to fix the problem, the vet said, would be for her to clean Clover’s teeth after anesthetizing her at a cost of at least $450. It would be more if she had to pull out any rotten teeth.

Maybe I’ve become stingy as I’ve aged, but I just can’t see paying so much money to clean my cat’s teeth, an amount that is triple what my dentist charges to clean my teeth.

I realize that a human-cat dental comparison is less than perfect and that market forces affect the costs of both, so I will not try to make such a point in this post. The point I do wish to make, however, is that the increasing expectations for veterinary care placed on pet owners is growing out of control.

I immediately balked at the amount the vet quoted me, and she defended the price, saying it was half what other vets in the area charge for cat dental cleanings. While I believed her, I still couldn’t see myself paying so much money to clean Clover’s teeth.

This discussion came moments after we had a similar debate over feline heartworms.

The vet told me how the standard of care has shifted away from vaccinating against and testing for feline leukemia for indoor cats who do not interact with other cats, for example, someone who fosters homeless cats.

Since cats catch feline leukemia from other cats, they won’t catch it if they aren’t around any, so there’s no need to vaccinate them against something they won’t likely catch. Sounds logical to me.

Instead, however, the standard of care is to vaccinate all cats (even those who don’t go outside) against heartworms, which they can catch through a mosquito bite.

I challenged her on the reasoning for testing indoor cats for heartworms, and she said that mosquitoes can come inside and bite Clover.

I quickly ran through the likelihood of such a thing happening.

First, a mosquito would have to come inside, which is unlikely given that we do not keep our windows or doors open in the summer, when the little buggers are most active.

Second, assuming a mosquito came inside, it would have to fly under Celeste and Karen’s bug radar, which is rather acute. Both my daughter and wife are quite adept at finding pesky invaders and pointing them out to me.

Third, the mosquito would have to bite one of our two cats when there are four larger mammals in the same household who would make much larger and sweeter targets. Who goes for chopped liver when there’s filet mignon one plate over?

Fourth, that mosquito would have to be carrying heartworm larvae, instead of West Nile or whatever virus is going to sprout up that summer.

I figured I’d have a better chance at winning the lottery, and I don’t even play, so I declined.

In the end, I walked away from the appointment feeling as though they were judging me for not taking care of Clover in the manner they suggest, almost as though I must not love my pets if I’m not willing to spend hundreds, or maybe even thousands, of dollars on their veterinary care.

But I don’t see it that way.

Of course I love Clover, as well as our other cat, Mario. I will give them a good home, and treat them better than some people treat their family members. I will also make sure they are not in pain or suffering, but there is an amount of money I will not pay to treat what ails them or extend their life artificially out of some human desire to avoid the sense of loss inherent in death.

So I’m going to try my hand at feline dentistry by brushing Clover’s teeth. Hey, it can’t be any harder than herding cats, can it?

This entry was posted in Blog and tagged Cats, Clover. Bookmark the permalink.