I may not be the readers’ choice, but I am my children’s choice

Well, I didn’t win it. Despite my best efforts, and I’m sure yours as well, I did not win the Readers’ Choice Award for Favorite Fatherhood Blog from About.com. 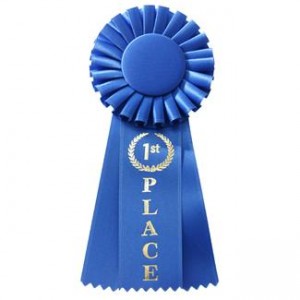 I didn’t win a Readers’ Choice award for Favorite Fatherhood Blog from About.com, but I’m No. 1 where it counts: my children’s hearts.

I don’t know the final vote count (About.com doesn’t say), but I want to thank everyone who checked the box next to my name.

I even heard from a couple of folks who said they voted every day, or as much as the contest would allow. It feels great to have such loyal readers, but in the end it was not to be.

I was up against some devoted bloggers:  Fatherhood Matters, Neurotic Dad, Paging Dr. Dad, and Go Fatherhood,

I suppose losing a competition like this isn’t so bad. After all, Chris Daughtry didn’t make it to the top three when he competed on American Idol, but still went on to sell millions of records.

And Jennifer Hudson came in seventh when she competed on American Idol, but has since won an Oscar, a Grammy, and sold a few million albums to boot.

Given those examples, it’s clearly possible to lose one competition and still win later, so I’m not going to give up writing about life as a dad who grew up without one.

I’ll keep plugging away, and hope that uninvolved dads find in these words the inspiration they need to play an active role in their children’s lives.

Dads need to know that they matter to their children, and that they can be the glue who holds the family together or the wedge that drives them apart. I’m reminded of that every day in the way my children show me how important I am to them.

Why, just the other day, as I was sitting down to write this very blog post, my 8-year-old son Gavin asked me to help him put together the LEGO sets his friends gave him for his birthday.

It didn’t matter that we had already built two or three sets that day. He had more to put together, and they weren’t going to build themselves.

I know he could have built them on his own. He’s done it before, but but he didn’t want to.

“I just like building LEGOs with you Daddy,” he told me.

“I like it, too,” I replied as I stood up and walked away from the computer.

I can always find time to write later, but Gavin is only going to ask me to build LEGOs with him for so long. Writing can wait, and it did, until the following night or two after my kids went to bed and on the commute to my job in Washington, D.C.

So I’m OK with not winning the Readers’ Choice Award.

What more does a dad need?

This entry was posted in Blog and tagged Engaged fatherhood, Gavin. Bookmark the permalink.