Losing the race, but still having fun

One of the tougher challenges I face as a father is knowing when my children learn the lessons I teach or simply recite what I say so they can tell me what they think I want to hear. 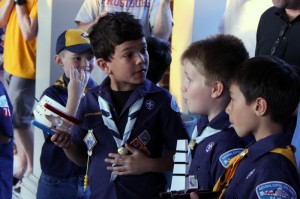 “I didn’t win a trophy, but that’s OK,” Gavin explains to his friend.

Take sportsmanship as an example. As the coach of Gavin’s 10U baseball team, I stress the importance of learning the skills as an individual player and downplay the value of winning as a team.

Sure, it’s nice to win, but I’d rather lose a game while teaching a young boy to field a grounder than win a game as he sits on the bench and watches his team play without him. When the game ends, I congratulate the boys for doing their best while reminding them not to boast if they came out ahead or hold their heads high if they lost.

I carry over this philosophy to other areas of Gavin’s life, including Cub Scouts. During his three years as a Scout, Gavin has yet to win a trophy for his Pinewood Derby cars or his Raingutter Regatta sailboats.

This year’s regatta was no different. As Gavin and I built his sailboat earlier this month, he dropped hints at how much he wanted to win a trophy.  Every time he did, I reminded him that winning a trophy wasn’t the point. That having fun and spending time together was more important than any piece of plastic.

“I know.  You always tell me that,” he’d say in response.

But do you believe me? I’d ask myself.

Part of me answered that question with a resounding yes. After all, he told me as much after last year’s regatta, but the echo of a doubt lingered. Was he just telling me what I wanted to hear?

I didn’t dwell on the question since I figured could never fully answer it.

Anyone who had ever attended a Cub Scout Raingutter Regatta would tell you it’s falls somewhere between mile hysteria and controlled chaos.  Each boy anxiously waits for his turn to race, soaking in any last-minute tips from Mom, Dad or older brothers while simultaneously cheering on his friends.

When Gavin’s turn arrived, he placed his boat in the water, waited for “Go!” then blew his 9-year-old lungs out.  I snapped away with the camera as though I were the sole paparazzi chasing Kim and Kanye through Europe.  Before I knew it, Gavin won the first heat and inched closer to a trophy.

He slipped triumphantly back into the crowed, and waited for his next heat. Before long, his second heat was up and I was ready with the camera.  He won again, and inched still closer toward his first trophy.  The look on his face told me how much he wanted one, regardless of what I drilled into his head while we were making his boat.

As he stepped up for his third heat, one part of me hoped he would win while another prepared for him to lose.  I continued taking pictures, but the heat ended faster than I realized. He lost.

Gavin walked away defeated, but held his head high as he returned to the crowd and stood next to another boy from his den. I continued taking pictures, zooming in closely on his face. I wanted to see his reaction more than I wanted to capture it in pixels, but kept clicking away nonetheless.

His voice rose above the din as he held his dripping sailboat and talked to the boy next to him. “I didn’t win a trophy, but that’s OK,” Gavin told the boy. “I still had fun.”

I don’t know how I heard him. I’m sure I wouldn’t have had I been a wallflower instead of a shutterbug, but his words unmistakably broke through the boys chatting and cheering.

He had no clue where I was standing in the crowd, and didn’t know I could hear him, so I know he didn’t say those words for my benefit. He believed them. That’s more valuable than any trophy.

This entry was posted in Blog and tagged Cub Scouts, Gavin, Losing. Bookmark the permalink.