Losing a race, but learning an important lesson

One lesson I continually try to teach my children is the importance of losing gracefully. 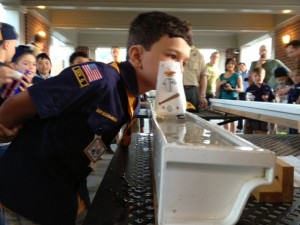 Gavin looks over to his fellow racer during the Raingutter Regatta and realizes that he is losing the race.

After all, little says more about our character than how we behave when we lose, and I want my children’s actions to show the world how gracious they can be.

I started out a few steps behind the curve, particularly when Gavin was 5 years old.

But he’s beginning to understand the lesson, thanks in large part to baseball. Still, I sometimes hold my breath and brace for the worst during games and other races, most recently during the Raingutter Regatta for the Cub Scout pack.

As we made the boat in the days before the race, Gavin kept repeating how he had never won a trophy before. That this is only his second year in Scouts and therefore only his second regatta made no difference to his 8-year-old mind. He wanted a trophy.

As we made our way to the race, I worried how he would react if he lost. Given that the races are single elimination and the boys’ boat designs varied widely, I knew winning the Raingutter Regatta is much about luck as a boy’s ability to blow air into the sail.

Part of me envisioned Gavin throwing his boat on the ground and walking away in disgust if he didn’t win.

I crossed my fingers when Gavin’s turn to race came. He and the other boy placed their boats in the water, and I positioned myself to take pictures. When the Scoutmaster told them to go, they both started blowing into the sails of their boats as though they were blowing out the candles on their birthday cakes.

As I snapped away taking pictures, Gavin took an early lead as the other boys in the pack cheered on both racers.

For a moment, I thought Gavin might win the heat and advance to the next round. But then he started losing steam and his boat started scraping the side of the rain gutter.

Moments later, the other boy reached the end of the rain gutter and advanced to the next round. Gavin lost by a foot.

I held my breath and walked over to console him as he worked his way back into the crowd. “Hey, you ran a good race, G,” I said, placing my hand on his shoulder. “You did the best you could.”

He shrugged and said nothing.

I took a few steps back to make room for the boys, but stood close enough to watch and see how he reacted to the other boys racing.

Within a few moments, he was cheering for his friends just as they cheered for him. I smiled and stopped worrying.

As we walked away from the regatta at the end of the night, I knew Gavin had learned what it means to lose well.

“I didn’t win a trophy, but at least I had fun,” Gavin said as he rubbed the edges of his boat with his fingertips. “I can add this boat to my collection. Now I have two. That’s a collection, right, Daddy?”

I could not have been more proud of him, even if he had he won a trophy. I realize it’s just a small step in his development toward becoming a good man, but this journey is made up small steps and each one is worth celebrating.

This entry was posted in Blog and tagged Cub Scouts, Gavin, Losing, Teaching. Bookmark the permalink.

2 Responses to Losing a race, but learning an important lesson