An innocent question about a buzzer recalls school shootings

I don’t often think about the school shootings that plague American communities periodically. 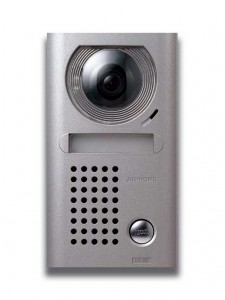 Not long after the Sandy Hook Elementary School shooting on Dec. 14, 2012, every school in my county installed buzzers like this one to improve security.

Like most fathers in Anytown, USA, I watch the news when the violence erupts, wonder how anyone could commit such horrors, and struggle with ways to explain it to my children.

I might even shed a tear for the lives lost. But I move on before long as the busyness of life returns, thankful that my community has been untouched by the bloodshed.

Still, I’m sometimes reminded of the tragedies when I least expect it, like one recent morning after taking Celeste and Gavin to the dentist.

When their appointments were over, Gavin and I walked Celeste to the front door of her middle school, buzzed in through the main office, signed her in, and waved good-bye as she walked off to class.

“Why did you have to hit that buzzer?” he asked.

“Because the school is locked,” I answered without much thought. “The only way in is through the buzzer. You hit the buzzer like a doorbell, and the secretary in the main office can see who’s at the door through the camera.”

“At least there aren’t locks on my school,” Gavin said.

“Oh, there are locks and a buzzer on your school, Gavin,” I said, again with little thought of where the conversation was going. “They’re on all the schools now. You just don’t see it because the school is open when you arrive. Once the school day starts, they lock the doors and turn on the buzzer.”

“But why are there locks on the school? Is there money in there? Is it to keep out robbers?” he asked.

“No, not money,” I answered, starting to wake up to the direction of the conversation.

I didn’t want to talk with Gavin about school shootings and increase security on the two-minute drive to his school. “No, it’s much more valuable than gold,” I said, hoping he would drop it.

Seeing no way out, I thought of a question that might appease him. “When you walk through school, what are the halls full of?”

“Kids and teachers,” he said.

“But why does the school need to lock the doors?” he said.

A quiet moment passed as I searched for an easy answer. “Oh, I know,” he said as he buried his face in his lap.

Gavin lifted his face, and looked me squarely in the eye. Innocence beamed out of his pupils like headlights cutting through the early morning fog.

“Murderers,” he said. His lazy R’s stuck to my ears like dusty sweat to my forearm on a humid afternoon.

He was right, of course, but I questioned how much I should tell an 8-year-old about school shootings when they aren’t even in the news. After all, children shouldn’t worry about a lunatic gunning them down while they are learning square roots, the names of the seven continents, and the rules of grammar.

“Where did you hear that?” I asked, knowing that Karen and I never would have used that language to explain school shootings.

He shrugged. “I don’t know,” he mumbled.

I didn’t press him on it, though. My time was up. We had just pulled into his school’s parking lot. We walked silently through the cars and to the front door. I showed Gavin the buzzer as I pressed it.

“That’s OK. It’s not your job to worry about these things,” I said. “That’s what adults are for.”

I passed the buzzer on my way out of the school, part of me thought how silly they are. After all, a locked door and buzzer won’t stop anyone who is determined from breaking into a school and gunning down innocent children.

But just as that thought entered my mind, I pictured the lock on my front door. I’m sure it won’t stop a determined gang of masked bandits from invading my home and robbing my family of every ounce of security we feel.

But I still lock it.

This entry was posted in Blog and tagged Gavin, school shootings, violence. Bookmark the permalink.