Seeing myself in rude people while selling Cub Scouts popcorn

I learn a great deal about myself as I father my two children, and most of the time I never see it coming. 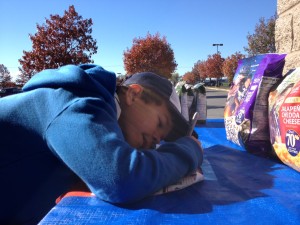 I certainly wasn’t looking to learn anything a couple of weeks ago when I stood with Gavin as he and another boy were selling Cub Scouts popcorn outside of our neighborhood grocery store for the pack’s annual fundraiser.

But I learned it nonetheless.

Every time someone walked in or out of the store, the boys would approach them and ask politely if they’d like to buy popcorn.

Some people would stop and say a kind word or two.

“Thank you, but I have my own Boy Scout, so I have all the popcorn I need,” others said.

Some donated $2, 5 or $10, preferring not to take on the extra calories that come with the chocolate- or caramel- covered treats.

And still others rushed by as if the boys were selling hemorrhoid cream, leaving them disappointed and frustrated.

I hate to admit it, but I saw myself more in that latter group than the previous two whenever I would pass any other child selling anything outside of a store.

I would rush by their stacks of cookies or candy without a thought or word. I was always in a hurry to buy what I came for, and couldn’t spare the 15 seconds it would take to politely decline their cute sales tactics.

I never gave it another thought because I never looked back to see the disappointment on their face.

But I saw it often in Gavin’s face as potential customers couldn’t find it in their busy schedule to politely decline popcorn.

“That’s OK, Gavin,” I said more than once. “No one has to buy popcorn, and you can’t make them be polite.”

Gavin got the hang of it after a while, and routinely thanked people whether they bought popcorn or not. He even sold enough to earn a pocket knife as a prize.

And I saw enough rudeness to two boys raising money for Cub Scouts to make sure I stop and say a kind word the next time I pass a child selling treats outside of a store.

If you’d like to buy any popcorn to benefit Cub Scouts and Gavin’s pack, just click here. If not, that’s OK too. Just politely click on by.

This entry was posted in Blog and tagged Cub Scouts, Gavin. Bookmark the permalink.