How can the same two words I’d say when someone passes the ketchup express the same gratitude I feel about every kind word, every email, every offer of help, every Facebook like, every prayer, and every everything so many of you have offered Celeste and our family in the last week?

But those are the only two words I can think of as I sit next to her at 4 a.m. the night she endured lengthy back surgery to fix scoliosis and listen to the cacophony of the hospital room.

A constant flow of air hums through the heating vent, setting the tone of the room’s soundtrack. An oxygen mask gurgles above it. The IV drip delivers vital pain medicine into her arm every several minutes, its plunging sound rising above all others like cymbals.

But I tune in to the sound of Celeste breathing. The deeper she breathes, the deeper she sleeps and the more her body heals. 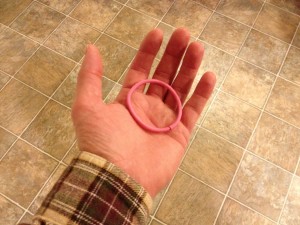 The hair band Celeste gave to me as the nurse wheeled her into the operating room.

I feel her hair band hug my left wrist. It could have been any of the countless hair bands she has asked me to hold for her through the years, but this one is special.

It was my physical connection to her as surgeons spent nearly seven hours fixing the scoliosis that curved her back. Celeste handed it to me moments before she went into the operating room when we realized her hair was in a ponytail.

She couldn’t wear it into surgery, so she handed it to me and I wrapped it around my wrist like I’ve done countless times in her life. It’s become a father’s reflex. No thought goes into it. You just slide it around your wrist until your daughter needs it again.

But an hour or so into the surgery, I realized the hair band was too tight. It was hugging my wrist and leaving an impression. I started playing with it to loosen it, but a thought occurred to me.

It was as though Celeste was hugging me. I knew she was asleep and doctors were fixing her spine, but as long as I felt the tightness of her hair band around my wrist, I had a small piece of Celeste hugging me.

I stopped trying to loosen it. I wanted to feel her virtual hugs throughout her surgery. I found comfort in it.

All the kind words, prayers, thoughts and moral support of everyone (from both those we know and don’t know) is just as comforting. They were emotional hugs that helped carry us through a difficult time, and left an impression on our hearts and souls.

And as Celeste heals at home through what will be a long recovery, we will continue to find comfort in the moral support you offered when it needed it most.

This entry was posted in Blog and tagged Celeste, Scoliosis. Bookmark the permalink.