Passing the milestones of recovering from scoliosis surgery

We all measure life by the milestones we pass, and few are sweeter than the ones we parents count for our children.

Whether it’s the first word, tooth, step, day in kindergarten, or bike ride, all parents marvel at how quickly their children grow and pile up life’s milestones. 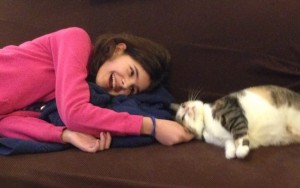 Clover has been a faithful companion for Celeste during her recovery.

But a child’s first surgery is one milestone no parent wants to pass, and one I never gave much thought to during my first 12 years as a father. With Celeste’s scoliosis surgery to fix her curved spine several weeks behind us, I pray we’ll never have to pass it again.

That day, Dec. 4, 2013, is burned into my memory. We woke up at 4:30 a.m. to give us plenty of time to arrive at Johns Hopkins Hospital in Baltimore for Celeste’s appointment. The drive was quiet. We had already said everything we could say in the eights weeks leading up to the surgery. All we had to do now was show up.

We listened as the DJs on Radio Disney asked the kids who called in if they ran water over their toothbrush before or after putting toothpaste on it.

Does it really matter? Probably not. I’d ignore the silly conversation on most drives, but on this one it gave us a light-hearted distraction from our destination. None of us wanted to make this drive, but we all knew we had to. The curve in Celeste’s spine had given us no other choice.

We drove through Baltimore City, parked, and found our way to the waiting room without incident. We sat uncomfortably for the nurse to call our name, and did our best to give privacy to the only other family in the waiting room by giving them as much distance as we could.

The friendly face of our pastor greeted us a few minutes later, and he kept us company while we waited. Our turn finally came. The nurse called us back to make the final preparations before surgery. Gown? Check. Vitals? Check. Allergies? None.

Prayer? You bet. As our pastor stood over Celeste’s bed and said a prayer, I placed my lips on her forehead and silently echoed my own. Celeste pulled away enough to look me in the eye. Her eyes spoke the words her lips failed to say: I’ll be OK, Daddy. I choked down a tear.

Our pastor left and Karen escorted Celeste to the operating room to stay with her until doctors put her under. I stood alone in the pre-op area wondering how to pass the time, but Karen returned moments later.

We walked to the waiting room. A computer screen mounted in the upper corner of the room displayed a spreadsheet of the numerous surgeries taking place down the hallway. It displayed no names. Numbers corresponded to patients, and parents could see where their child was based on the color that highlighted their child’s number.

Celeste was 960280. Green meant surgeons were operating on her. Red meant they were done, and she was being transferred to the recovery room or pediatric intensive-care unit. Brown meant she was already there.

Only one patient’s green grid was longer than Celeste’s, meaning someone’s child was undergoing a longer operation than my own.

Bless them. I looked around the room to see if I could tell who it was, but of course I couldn’t. No parent’s worry is worse than anyone else’s, regardless of the ailment or time in surgery. All our faces shared the same concern and told the same story, but no one’s eyes met.

It was as though no one wanted to acknowledge anyone else because if they did that meant it was real. If we remained in our own shells, and on our own islands, then perhaps we could wake up and find it was all a dream.

But it wasn’t a dream. We were all parents who were powerless to help our children more than we already had by seeking medical care from the best doctors in the world.

Whether one hour or 10, every parent counts the countless moments their child is in surgery. One mother passed the time crocheting something. A scarf? A sweater? I couldn’t tell. Her husband sat next to her with eyes fixed on his phone.

On the other side of the room, a father slept sprawled back in a chair not designed for anyone who needs to catch a few winks. His wife sat next to him staring off in the distance. Had they been anywhere else — a bus station, a shopping mall or a coffee shop — but in the same position, you’d swear he was drunk and she was thinking about leaving him.

But they looked normal in the waiting room of a pediatric surgical wing. I understood his need to sleep, and could read the blankness in her stare. They were just exhausted parents sick with worry over their child.

A woman from the front desk walked around the room and called our name.

“They’ve started,” she said when we made eye contact.

“Thank you,” we said and leaned back.

We’ve done all we can. Now we can only wait.

Karen wrapped herself in a blanket from home and pulled out her Bible to find passages related to Advent. The flipping pages stopped in Luke. Without reason, her eyes landed on chapter 8 verses 40-56, which told the story how Jesus healed a woman and rose a 12-year-old girl from the dead.

It’s one thing to know your child is in the best medical hands in the world, but it’s another to believe that she’ll be fine. I believed the moment I read that passage.

The next seven hours crept by in a haze. We read, napped, ate, and binged on Netflix.

I looked at Celeste’s green grid every 20 or 30 minutes, as though time would pass faster. It didn’t. Her pink hair band hugged my wrist the entire day.

Families spread out around the waiting room to give each other more space and some sense of privacy, even though true privacy escaped us all. A doctor would walk through the room periodically, sit down with family, and explain how the surgery went.

A couple doctors led families into one of the smaller rooms that dotted the edge of the waiting area, and closed the door.

I wouldn’t want to be escorted into one of those rooms.

Celeste’s doctor eventually entered the room, but I couldn’t make immediate sense of his presence.

Shouldn’t you be operating on Celeste? … Oh! You’re done?

I nudged Karen. We both dropped everything, and stood. His smile told us everything we needed to know.

“She’s fine,” he said. “She did great. No problems whatsoever.”

Someone would come and get us when she was in the pediatric intensive-care unit, he told us before he left. He walked away as though it was just another day at the office for him, which of course it was.

The anesthesiologist and a nurse came out a few moments later, and repeated what Celeste’s doctor told us.

“Yeah, it was kind of boring,” the nurse said through a smile. Of all the words anyone could say to ease parents’ nerves about their child’s surgery, “boring” tops the list.

A nurse guided us to the pediatric ICU a few moments later, and we found Celeste resting quietly. Her bloated face disguised her natural beauty, but I still recognized her. I suppose a father can recognize his children regardless of their physical condition.

The surgery was over, but the hard part — the recovery — was about to begin. I kissed her forehead and thanked God for watching over her while surgeons fixed her back.

Now here we are, nearly five weeks weeks after the surgery, and Celeste is recovering smoothly. She’s even an inch-and-a-half taller than before the surgery, now that her back is straight.  We’ve faced a few hurdles along the way, but for the most part Celeste’s recovery has been as “boring” as her surgery.

Many other such milestones remain, but we will count those in terms of months given that full recovery takes a year.

But perhaps the one I look forward to the most is as literal as it is figurative: the day Celeste climbs back on a horse at our local riding club and trots around the ring as carefree and pain-free as she was before surgery.

This entry was posted in Blog and tagged Celeste, Scoliosis. Bookmark the permalink.

3 Responses to Passing the milestones of recovering from scoliosis surgery