The middle of divorced parents is no place for a child

Why can’t divorced parents ask their children about their ex-spouse? 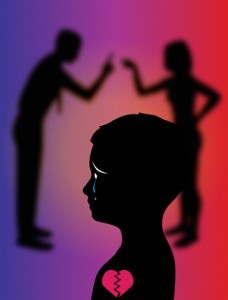 That’s the essence of a question someone asked me after reading this post two weeks ago, and noted how I appreciated that my mother never asked me about my father or phone conversations I had with him when I was growing up. To do so would have put me in the middle of their broken relationship, and my mother never did that.

The person who asked me this question didn’t see it as putting children in the middle as much as someone simply asking harmless questions about another person they both know. After all, don’t we all ask family or friends about other family members or mutual friends?

Fair question. I’m sure my brother and I have talked about our brother or sister, or that I have talked with a friend about a mutual friend. But I am equally sure that the rules change once parents divorce.

Before I go on, I should be clear in saying that no two divorces are alike, even though the similarities can be striking. How many divorces involve someone stepping out on their spouse? Alcohol or drug abuse? Lack of communication? Physical or mental abuse? Financial troubles? Lack of romance or friendship?  Religious differences?

The causes of divorce usually boil down to those troubles, but the people involved are as different as they are individuals, and the children who are the products of the marriage are as equally diverse.

Given that, can some single parents innocently ask their children about their ex-spouse? I suppose they can, especially in those rare circumstances where the parents split amicably and could spend an evening at the same dinner table without a food fight breaking out.

But most divorced people I know, both now and growing up, would rather not see their ex, so asking their children about their mother or father would unquestionably put them in the middle of a storm they should not have to weather.

So, if you ever find yourself wanting to ask your children about your ex-spouse, first ask yourself why you want to know. If you’re just trying to satisfy a strange feeling of curiosity, don’t. The answer won’t matter.

Perhaps things have never been better for your ex, which if is the case will only cause you to feel bad for yourself or question every day the two of you were married. Aren’t you already doing that, if only to figure out which day your relationship started to veer off course?

It’s best to spend your energy rebuilding your life and raising your children. They need you now more than ever. As the adage goes, you can’t start the next chapter of your life if you keep reading the last one.

Or perhaps things are going terribly for your ex. A small, twisted part of you may relish in hearing that, particularly in bitter breakups, but the only thing your question will do is force your children to decide whether or not they should tell you the truth.

And that, my friends, is square in the middle.

Ultimately, children want their parents to be together (assuming, of course, that abuse played no part in the breakup). But if that simply is not going to happen, you’re best keeping your curiosity in check and asking your children how school went.

This entry was posted in Blog and tagged Divorce, Single Parents. Bookmark the permalink.