A whisper of hope falls silent 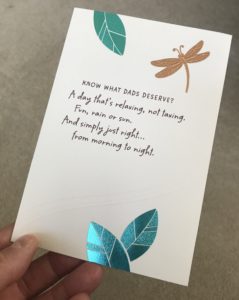 I delayed calling in part because I never made the effort to send your card, and a small part of me felt guilty.

I didn’t want to explain myself to someone who wouldn’t understand. I tried that before, and my words never mattered. I’ve written countless such words, and heard no expression of regret. 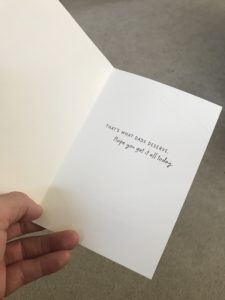 Why should I keep trying? Words only matter to people who want to hear them, and mine never seemed to matter.

I don’t know why I would feel guilty about not sending a Father’s Day card. It’s not as though Father’s Day holds any special meaning to me.

We set aside that day to honor our fathers, to thank the men who raised us and made us who we are today.

What would I say to you? Thank you for not being there?

I still have the card. Karen bought it a few days before Father’s Day so I could send it to you, but I never mailed it.

She knows what kind of card to buy. Nothing mushy or thankful. Nothing crude or juvenile. And nothing personal. Just a plain card that acknowledges Father’s Day, one I could simply sign my name and be done with it.

But I didn’t have your address. You had just moved into assisted living, and didn’t send it to me. Doesn’t the person who moves usually tell people their new address, especially their children?

I kept waiting for an email, card or phone call to tell me your new address, but it never came. I guess you couldn’t make the time, much like I hadn’t.

So I delayed calling you on Father’s Day, and felt a small sense of relief when I saw your name on the caller ID.

We didn’t speak long, but you were in a surprisingly good mood, a stark contrast from our other recent conversations. We wished each other a happy Father’s Day.

I updated you on your grandchildren’s lives, and you told me how you were adjusting to your new life in assisted living. Things seemed to be going well. You gave me your address and voiced no complaints.

We hung up after 10 or 15 minutes, just about the time we ran out of mundane topics to talk about. But it was a good conversation, as shallow as it was. I even told Karen as much.

Of course, I didn’t know that would be the last time we’d speak. You died six days later. But even if I had known, I’m not sure I could have said what I would want to say.

I’ve said it before, and you voiced no regret.

No acknowledgement of the hardship you caused by leaving us 40-some years ago for a younger woman. No sorrow for forcing us to grow up fatherless.

That’s all I wanted. A simple, “I’m sorry. I didn’t understand what my absence would mean.”

It never came, and now it never can, even though I had no reason to believe it ever would.

History told me it would never come, but a piece of me, an ever-shrinking piece of me, still held out hope. Children always hope. Even as adults we hope.

Not anymore. The whisper of hope I once heard fell silent a year ago.

Children usually mourn a parent’s passing and remember the good times they shared.

I have no such memories involving you, so how could I grieve your passing? I’ve never wished for more time together because we spent so little time with each other, and the time we did spend together felt like an obligation neither of us wanted.

What good is an occasional weekend together when the moments that matter most occur unscripted in the mundaneness of everyday life?

But I do know how to mourn the loss of something that can never be.

This entry was posted in Blog and tagged Father's Day, Fatherlessness. Bookmark the permalink.

3 Responses to A whisper of hope falls silent