When does winning in youth sports become the ultimate goal?

At what point does winning in youth sports become the ultimate goal?

Without question winning at the professional level is paramount. If Sunday’s Super Bowl proves anything it’s that America loves athletes who can perform well and win games, regardless of power outages. 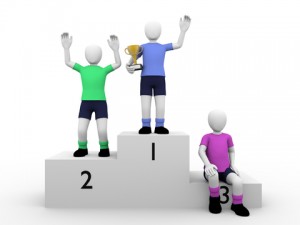 Everyone loves a champion, but at what point does winning in youth sports become paramount? (Image © Alfonsodetomas | Dreamstime.com)

And I doubt anyone believes that winning preschool games matters even a smidgen of an iota.

But when does the changeover happen? How many steps do our kids take between the hopscotch lines on the playground where no one is watching and the yardage lines on the gridiron where the world analyzes every move athletes make?

I ask because my children, Celeste and Gavin, are a few steps beyond the hopscotch court and taking their early steps in the world of youth sports.

They are in elementary school, and have played baseball, soccer and basketball in recreational leagues, both for public recreation departments and private organizations. These are the leagues where anyone can play as long as they sign up in time, and organizers can find the fields, courts and coaches willing to give the time.

I’ve been on both sides of the whistle. I’ve been the coach who corralled a dozen children on the soccer field, and tried my best to teach pint-sized outfielders how to shag a fly in a league where most kids are lucky to ground to third.

And I’ve been the dad who sits in the bleachers hoping his child will shoot the ball at the basket instead of passing it off as though it were on fire.

As far as I’m concerned, winning in youth sports at the level my children play is irrelevant, but I’m finding that opinions among parents and coaches vary widely on this point.

In fact, I’ve seen coaches yell at their young players from the sideline because they aren’t in the right place or moving the ball around enough. And I’ve been chastised by another coach for not enforcing the infield-fly rule with players who couldn’t shag an iron fly with a magnetic glove.

To me, emphasizing winning at their level of play is silly. The range of athletic ability among young children is wide, and just as often a result of maturity and size than actual skill.

Coaches are more likely to pick their players out of a hat than based on ability, so teams could be full of ringers or kids who don’t know the difference between a three-pointer and a field goal.

To me, what matters most in these leagues is that the children learn the basic skills and rules of the game, how to play a clean game, and how to support their teammates and develop a sense of good sportsmanship.

I could not care less about the score, but not all coaches feel the same way. Some will sit out their less-skilled players because they care more about winning than developing players, much like the coach I had the one year I played baseball as a kid. I still shudder thinking about that coach and season.

In recreational leagues where anyone can play regardless of ability, coaches should focus more on developing players than on winning.

Scores should be irrelevant, and playing time should be comparable for all players on the team. Players should also have a decent turn at each position to see if they can excel at one.

Winning should start to matter in select leagues where players have to try out and can be cut because their skills are not up to par.

After all, kids who can play at the select level need more intense training, better coaches, and are more likely to grow up and play professionally than someone who plays just to have fun.

All other kids should just be able to play regardless of their ability or the numbers on the scoreboard.

This entry was posted in Blog and tagged Youth Sports. Bookmark the permalink.