How stubborn can a 5-year-old boy be?

Stubbornness can be a wonderful trait in a person. After all, were it not for a stubborn inventor in the late 1800s, we might all still be reading at night by candlelight. 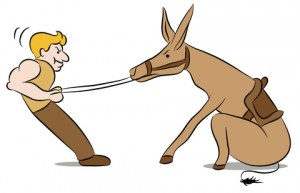 But does it have to be innate? Parenthood would be much easier, or at least certain aspects of it would be more tolerable, if we had to learn how to be stubborn as young adults.

If you can’t tell, I recently had a run-in with a stubborn child, my 5-year-old son, Gavin. He eats little for dinner, but neither Karen nor I make an issue out of it if we choose what food to put in front of him. But if he asks for something specific, I expect him to eat it. Without complaint.

That’s not too much to ask, right? Wrong.

Karen made breakfast for dinner recently, and Gavin asked for scrambled eggs. But when the time came to eat what he asked for, his hunger magically disappeared. He wouldn’t touch them.

I felt frustrated largely because he asked Karen to make him eggs. The way I figure it, if you ask for a specific food, you eat it, even if you’re only 5. Of course, Gavin disagreed with me, said he wasn’t hungry anymore, and dug in deeper than a deep-sea oil wellhead.

“No dessert if you don’t eat your dinner,” I said calmly.

Normally, I wouldn’t mind because that just means more for me, but I had to make a point. He asked for eggs, and he was going to eat them. He still didn’t seem to think so.

Both Karen and Celeste, our 9-year-old daughter, finished their dinner, so they left the table. I finished mine and began cleaning up the dishes. Gavin just sat in his chair and stared at his eggs. After a few minutes, he said softly, “Daddy, I don’t like my eggs.”

“Then why did you ask for them, Gavin?”

He shrugged. “They’re cold,” he said after touching them.

“That’s because you waited so long to eat them. The longer you wait, the colder they get.”

“I can warm them up for you if you’d like, but you are going to eat them.”

Nothing. He just sat there pouting, but I wasn’t going to give in. He asked for the eggs. He was going to eat them. It had turned into a battle of the wills between a stubborn 5-year-old boy and his stubborn 42-year-old dad, but I have 37 years of stubbornness on him. No way he was going to best me in this battle.

He still didn’t agree with me. He sat there for 45 minutes staring at cold eggs while I continued to clean the kitchen.

“How stubborn can one boy be?” I thought, but realized it was too late for me to back down. I couldn’t let him win. That would just embolden him next time. I didn’t let my frustration show as I realized the source of his stubbornness was the one doing the dishes.

Family legend has it that I too squared off with my mother when I was a child over dinner one night. She served peas that night, and I don’t like peas. Never did and still don’t.

I hate the way they squish in your mouth and leave a trail of slime on your throat as they make their way to your stomach. Plus, these were canned peas of the 1970s. What could be worse? Yuck. I wasn’t about to eat them, and to this day I would rather not.

I have vague memories of sitting at the kitchen table refusing to eat those squishy, canned peas while my mother sat there waiting for me to eat them. I don’t remember who won, but I’m not still sitting at that table so someone obviously gave in.

As Gavin sat at the table in front of his cold eggs, I began to think of a way out of this mess. It was getting late, and he had homework to finish before bedtime. I was running out of time, and options. But I couldn’t give in. No way.

Luckily, Karen came downstairs, warmed his eggs, and fed them to him while she helped him with his homework. I quietly looked on as he ate most, though not all, of the eggs he asked for dinner.

I don’t know who won that battle, and I’m not sure it ultimately matters. In fact, part of me is glad that Gavin can be so stubborn because it will serve him well as he grows up and faces life’s challenges. The trick will be learning how to use his stubbornness and when, a lesson I obviously haven’t mastered.

This is a repost of a column that appeared in The Gazette on Nov. 4, 2010. Gavin is now 7, and just as picky an eater. But I have chosen not to engage him in this battle of wills again. I’ll save my energy for a battle that truly matter.

This entry was posted in Blog and tagged Gavin, Gazette. Bookmark the permalink.