A small victory in my three-year battle with CFL bulbs

I’m sure you’ve come here so early in 2013 expecting to read about new year’s resolutions and how I hope to be a better father this year than last. 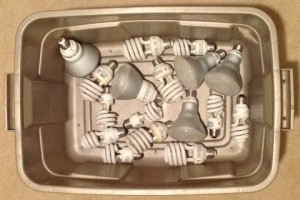 My collection of burned-out CFLs, just waiting for me to take them to a hazardous-waste collection day because they contain mercury.

Believe me, I’ve been pecking away at such a post these past few days, but something happened last night that got me all worked up. And when I get worked up, I write.

You see, a light bulb burned out.

I know what you’re thinking: Big deal. Change it and be done with it.

No, it is a big deal because this isn’t just any light bulb. It’s a compact fluorescent lamp, the kind that are supposed to last longer and use less energy than regular light bulbs.

The only problem is, they don’t last longer and are more trouble than they’re worth.

I jumped on the CFL bulb bandwagon a few years ago after Congress passed a law to phase out regular bulbs. (Congress later overturned it.)

I bought oodles of CFL bulbs and changed nearly every regular bulb in the house. I didn’t track how much money I spent buying the darn things, but given their cost, I’m sure it was several hundred dollars.

No big deal, I thought. These fancy bulbs use so much less energy, I’ll make it up in savings on my electric bill.

But then they started to burn out. And fast.

At first I thought it was a fluke, so I shrugged. Light bulbs burn out all the time. Since the CFL bulbs contain mercury, I set them aside in a plastic bin to throw away on the days my county collects hazardous waste.

I kept buying CFL bulbs and trading out the traditional bulbs with a smile on my face.

Then more bulbs burned out, and my smile turned into a small dose of rage. I’d been duped by the CFL cartel.

I noticed on one of the boxes that each had a five-year guarantee, but I needed the receipt. Who keeps light bulb receipts for that long?

Then it hit me: You do, at least now you do.

So every time I bought a new bulb, I would number it, write the same number on its receipt, and then keep the receipt and UPC symbol from the box until it burned out.

I was intent in cashing in on the five-year guarantee.

Through the years, bulbs kept burning out, but none had numbers on them so I didn’t have the receipt for them. I cursed every single one I threw (gently) into the plastic bin, which only reinforced the resolve I felt to keep track of the bulbs that burn out and claim my guarantee. 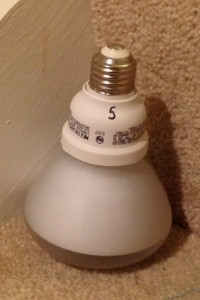 Then finally, CFL No. 5 burned out on Monday night.

I looked in my files, found its receipt and UPC symbol, and mailed in both to cash in on that five-year guarantee. Only three years and three days have passed since I bought that bulb, so I soon expect a coupon that will replace it.

So, what does this have to do with fatherhood? Nothing, and yet everything.

Any good father does his best to save money for his family, and these high-tech light bulbs are supposed to save money.

Sure, they cost more to buy, but they are supposed to last longer and use less energy, so they cost less in the long run. “They use up to 75 percent less energy and last up to 10 times longer,” the box claims.

What father wouldn’t see value in that? Of course, I’m sure any money I save will be spent on my family in other ways, but I won’t complain about that.

These bulbs are also supposed to be better for the environment, or at least that’s what the box claims. “Did you know if every household used one two-pack … CFLs, over the bulbs’ lifetime they would prevent the emissions equal to 1.5 million cars being on the road?”

What father doesn’t want their children to breathe fewer emissions?

And, of course, any good father wants to teach his children perseverance. Sure, I could have given up all those years ago, not keep track of the bulbs and receipts, and just buy new ones as the old ones burned out.

But that means they would have won. Not this time.

The Coyote has finally caught the Road Runner!

This entry was posted in Blog and tagged CFLs. Bookmark the permalink.