Today’s lesson: Walking away from your frustration

Given that it’s still January, I should probably tell you how I’m doing with all the new year’s resolutions I made for 2013. 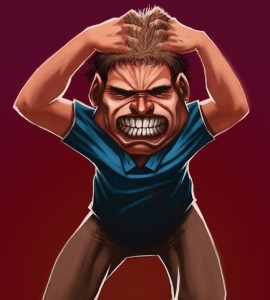 Of course, that would be a short post. I don’t even see how it could be a tweet. Wouldn’t even be a CliffNotes of a tweet since I don’t make new year’s resolutions.

Oh, I have things about me I could improve, but I see no need to wait until Jan. 1 to start working on them. I’m often reminded of my flaws throughout the year, and when I realize I should work on improving one, I see no point in waiting until next year.

And if the last few weeks taught me anything, it’s that I have some work to do.

You see, I lose my cool when I become frustrated. In fact, I’ve been known to break a thing or two in my time when putting something together if the pieces don’t fit like the instructions say they should.

But it’s not just assembling things. It’s also figuring them out. I bought Karen the latest iPhone for Christmas, and for nearly two weeks I could not figure out how to activate the iMessage and Facetime features.

No matter what I did, neither would work. I surfed website after website and tried every fix I could find. Nothing.

My frustration grew with every failed attempt at fixing the high-tech gadget, and I soon wanted to throw the phone out the window to see how far it would fly regardless of how cool it was supposed to be.

But I know myself, and recognize that I’m no good when I’m frustrated. So I put down the phone, and walked away before turning the latest smartphone into a dumb paperweight. (OK, it was more than once.)

Then a few days later, after calming down, I decided to try again by searching the Internet using different keywords.

I found a different discussion board that said neither feature works if you block text messages, which I had done years earlier after learning our plan charged 15 cents per text message. (Yeah, it’s an old plan.)

We called our service provider, unblocked text messages, and voila! It worked.

I’m glad I walked away.

My frustration is at its worst when it’s focused on me, but I have to admit it can rear its ugly head when I help my kids with their homework.

One recent night, my 11-year-old daughter Celeste asked me to help her with her math homework. The problem seemed simple:

Mary’s classmates made 3.44 pounds of reindeer treats and wanted to put an even amount in four bags. How much would go in each bag? (I can’t remember the exact wording of the problem, but the numbers are correct. That much I remember. Trust me.)

Celeste recognized that the problem required division, but she couldn’t figure it out. She knew there wasn’t enough treats for each reindeer to have a one-pound bag of their own, but that’s all she knew.

I tried everything I could think of to explain it to her, but she couldn’t grasp it. With each failed attempt, my frustration grew and my voice sharpened.

I took a deep breath, and tried to start simple: If you have one pound of reindeer treats, and want to put it evenly in one bag for a reindeer, how much would you put in the bag?

Well, that stumped her because she told me she didn’t know the answer (hint: it’s 1 pound). My frustration peaked, and I knew I was no good trying to tutor her.

She was done, and so was I. We decided to break for dinner, and after a few hours she returned to her homework much calmer.

She understood the problem, answered it with no help from me, and finished the worksheet without running into any other roadblocks, including those her father put in her way.

I apologized, of course, and realized how much work I have to do to control my frustration, especially around my kids. And that’s not a new year’s resolution. It’s just No. 1 on my self-improvement list.

This entry was posted in Blog and tagged Celeste, New Year's resolutions, Teaching. Bookmark the permalink.

2 Responses to Today’s lesson: Walking away from your frustration