Another victory in my battle with CFLs

I feel like Charlie when he opened the candy bar and found a golden ticket to tour Willy Wonka’s chocolate factory. 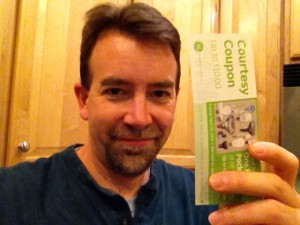 It’s not quite a golden ticket to tour a chocolate factory, but I’ll take it.

Of course, the ticket I hold isn’t golden, and it won’t grant me access to what is arguably my version of heaven on Earth.

No, the color of this ticket is two shades of green on a white background. And the best it will do is help light up my home, or at least a couple of rooms in it.

You see, it’s not actually a ticket. It’s a coupon good for one package of GE light bulbs worth up to $10. It’s my reward from one of the largest companies in the world for keeping track of what has to be one of the industry’s biggest failures: compact fluorescent lamps, or CFLs in industry lingo.

Two months ago, I wrote about my ongoing battle with these plagues of modern-day lighting technology, and how I was cashing in on the company’s five-year guarantee.

Not too long after, GE responded by sending me this peace offering to make good on that guarantee.

“We regret that you are dissatisfied,” the company wrote. “The problem you encountered is not typical of the quality and performance of GE products. However, even the best of products may occasionally fail to meet our expectations.”

“Not typical,” eh? I have a plastic bin full of burned-out CFLs that would argue otherwise.

Part of me expected the company to not honor its guarantee, and for it to tell me that I didn’t follow all the directions carefully enough to claim the guarantee.

After all, how do they know I’m not just saying the light bulb burned out when in fact it’s still shining brightly from the recessed outlet in the ceiling?

How do they know I’m not the leader of some rebel band of societal misfits who spend their time wrongly cashing in on company guarantees?

How do they know I’m not a failed Oompah Loompah who’s avenging his rejection on innocent companies?

OK, maybe it’s a good thing this coupon isn’t a ticket to tour a chocolate factory. Clearly I’ve inhaled too much cocoa powder. I suppose I’ll just go and cash in on my free, conventional light bulbs.

1 Response to Another victory in my battle with CFLs