If I’ve learned one thing in my nearly dozen years as a father, it’s that the best conversations I have with my children are spontaneous. This is especially true for touchy subjects, whether it’s personal safety or drugs and alcohol. 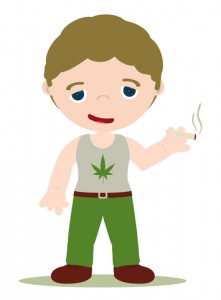 I don’t know why this is, but both Celeste and Gavin pay better attention and are more engaged in the conversation when it happens naturally. It’s even better when they bring it up themselves, which Celeste did the other night.

We had just finished dinner. Celeste was telling us about her day at school and how the teacher taught the fifth-graders a unit about drugs, the same one they have every year only the discussion becomes more detailed and advanced as she ages.

Given that she’s entering middle school in the fall, I want her to be well aware of the dangers she’ll encounter and the intense peer pressure she’s about to face.

I’m happy to say that Celeste paid attention to the unit, and is taking the lessons seriously. So far, she seems intent on avoiding drugs and alcohol, and hasn’t been exposed to either.

Some children her age aren’t so lucky. According to the National Institute of Drug Abuse, many kids in America take their first hit of a joint or sip of alcohol not long after turning 12, which Celeste will be this fall.

It pains me that not much has changed in the nearly 30 years since I faced these same pressures. I remember critical moments of my youth when I found myself at the crossroads of right and wrong. A soft internal voice often tried to steer me toward the right, but a din of teenage voices and vices sometimes drowned it out and pulled me to the left.

My internal voice ultimately won, but I lost many childhood friendships along the way. One stuck out in my mind as I talked with Celeste about drugs, alcohol and the dangers of peer pressure.

I warned her that even her best friends may one day choose drugs over her friendship, just as one of mine did long ago. He loved the high so much that he allowed it to destroy the kid he was before his first hit. His parents eventually found themselves at their wits’ end, and kicked him out of their home in a show of tough love.

My mother agreed to take him in on one condition: No drugs. The arrangement didn’t last long. As bedtime approached one evening, he told me he was going to sneak out and smoke weed. I tried to talk him out of it, but he shut me down with little thought.

I had a choice to make: allow him to sneak out, enable his drug use, and take advantage of my mother’s hospitality or tell my mom. I found myself facing the hardest and easiest decision of my life up to that point. I valued his friendship and didn’t want him to destroy his life, but nor would I enable his drug use.

I ran upstairs to tell my mom. She followed me back down to see what was going on.

Most friendships die a slow, natural death as interests change or we age, and few of us ever remember the last breath. I remember that one with painful clarity.

“It’s time for me to go, Kay.” He spoke the words with no emotion, as though the drugs dulled any feeling he ever felt.

I can’t say the same for me. My anger exploded moments after he walked out the door. I repeatedly pounded the wall with my fist without feeling a pinprick’s worth of pain.

We never hung out again, and I only ran into him accidentally a couple of times in the immediate years following that night. I have no idea where he is or how his life turned out.

I do hope, however, that he bears no malice against me and understands my decision that night. He chose drugs over our friendship, and I chose to listen to that little voice inside me. It found a megaphone that night, and had no trouble drowning out the din from the pressures of drugs ever again.

Celeste sat silently as I told her my story of that night. She said little if anything when I finished, but I hope she understood my main point: Even your best friend chooses drugs, you don’t have to make the same choice.

I’m proud to say I made the right choice many times, but disappointed I can’t say every time. I can only pray that the wrong decisions I made three decades ago will guide me in helping my children make the right choices today.

This entry was posted in Blog and tagged Alcohol, Celeste, Drugs. Bookmark the permalink.