Moving on is as easy as recycling newspapers

Why, I might just throw away my own baby picture if I happened to find it laying around the house during a cleaning fit. 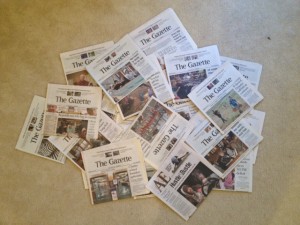 Just some of the newspapers I’ve collected over the years, but am finally recycling.

But I must admit to one exception: newspapers.

I have stacks of newspapers stored in plastic bins on homemade shelves in the basement. I even have a few errant stacks laying against the wall downstairs, just sitting there as though they were corns on the left foot of my home.

In fact, I probably have more newspapers than your neighborhood carrier before he starts his morning route, which isn’t saying as much these days as it might have 20 years ago.

It makes sense if you think about it. For nearly 20 years I worked as a reporter and editor for a chain of community newspapers in Maryland before accepting a buyout in December 2011. A person can collect quite a few newspapers in two decades.

I don’t remember when I decided to work at a newspaper. I only remember learning early in school that I could write well, and newspapers offered a career in which I could write every day.

I didn’t care about being the next Woodward and Bernstein, contrary to many other journalists-to-be who grew up in the shadow of Watergate. I only cared about making a living doing something I did well. Who doesn’t want to make money using their natural talent?

I remember my first summer internship at a community newspaper 23 years ago. I worked eight hours a day, five days a week for that small paper, and didn’t earn a dime.

But I wasn’t doing it for the money. I needed clips, which is newspaper jargon for published stories I could show potential employers after I graduated college. I suppose you could say they paid me in ink, and I was happy to do it.

I was equally ecstatic a couple years later when I landed my first job as a reporter for a competing newspaper, the one I ended up working at for nearly 20 years.

It ran on less than a shoestring budget. Our computers had no hard drive, so we had to boot them up off of a 5-inch floppy disk every day. We had no internal network. I turned in the stories I wrote to my editor on a floppy disk, and she had to send them to the mainframe via modem after she finished editing them.

I went to more night meetings of town councils and commissions than I care to remember, and learned more about urban planning, stormwater management, and the politics of trash incineration than I ever thought existed in the first place.

I loved it. Not the long meetings and learning the details of wastewater treatment and zoning regulations, mind you. I loved earning a paycheck doing what I love to do: tell stories through the written word. I moved around different beats through the years in several offices and rose to the level of county editor before my time was up.

I suppose I had reached my level of incompetency, as the saying goes, just as the economy crashed harder than it had since my grandparents were young. Work became a chore. Layoffs became the norm, and staff reductions a nearly monthly occurrence. It was no longer fun, so when my turn came to voluntarily leave, I did.

But through those years I collected stacks of newspapers. I did not save every single paper of my career, but I saved enough to make a corner of my basement look like a small-town archive.

I think of this all now because last week I marked my one-year anniversary of working at the Royal Netherlands Embassy in Washington, D.C.

In many ways, my job is similar to that of a journalist, primarily in that I look for ways to tell people a story. The stories I tell now, though, focus on the Dutch culture, the Dutch influence on the world in the last millennium, and Dutch relations with the United States.

I enjoy my job, the people I work with, and learning about international relations, diplomatic traditions, and the geopolitical reality in which we all live.

I don’t miss my old job. The newspaper I left was far different from the one I started working for and loved, and yet still I have those stacks of newspapers downstairs serving as physical reminders of the job I once loved.

Or at least I did. I am slowly recycling them, so the stacks will eventually disappear. I’m sure my memories of those days will eventually fade, and that’s OK. People aren’t built to remember every detail of their lives. As the saying goes, you can’t live today if you are busy reliving yesterday.

1 Response to Moving on is as easy as recycling newspapers