Some guys yell at football, I yell during ‘Switched at Birth’

Like most American men, I’ve been known to yell at the TV.

Some men scream at the quarterback for throwing an interception with two minutes left in the fourth while others passionately correct the cable-news talking heads with whom they disagree. 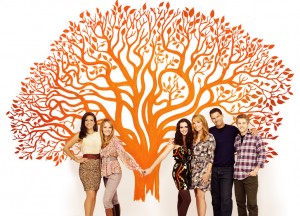 Me? I yell at the characters in “Switched at Birth,” the ABC Family show about two teenage girls who were, you guessed it, switched at birth. Drama erupts every episode because the two families move in together (sort of, anyway) so they can get to know each other.

One family is fatherless and lives in a poor part of town while the other is well-to-do because the father is a retired Major League Baseball player who owns a local chain of car washes. All the characters make so many bad decisions I could wind up horse after each episode if I didn’t control myself.

Of course, I haven’t always yelled at “Switched at Birth.” In fact, I barely knew about the show until Karen watched a few episodes with Celeste, our 13-year-old daughter, on an otherwise boring day a month or so ago.

It hooked me from the start, probably because of its unusual storytelling. The show not only revolves around the rare occurrence of babies switched at birth, but one of the girls lost her hearing at age 3 after contracting meningitis. As a result, many of the characters are deaf, so the show prominently features American Sign Language.

But what I like most about the show is that it puts teenagers in real-life (or at least near-life) situations, and gives me the perfect excuse to talk with Celeste about those situations without having to lecture or feel awkward.

For example, one of the storylines in the first season revolves around Bay (the daughter who can hear) and her love of doing street art, which is just a euphemism for talented graffiti. She’s been at it for two years, and has hid it from her parents.

Her father learns of her passion only after she tags one of his car washes to impress a group of new friends (other street artists who want Bay to prove herself). He expresses his frustration at the graffiti despite Bay defending it as artists (including herself) expressing themselves.

Her father refuses to budge, belittles the graffiti, and considers it nothing more than “gang-bangers destroying private property.” Naturally, Bay takes it personally and is hurt by her father’s reaction.

It gave the perfect chance to yell at the TV how Bay should have been honest with her parents from the start.

“See, Celeste, that wouldn’t have happened had she been honest with her parents,” I said. Celeste nodded in agreement, or at least I think she did. Sometimes it’s hard to tell with a 13-year-old.

In a different storyline, Daphne (the deaf teenager) is infatuated with the chef (who is in his late 20s) at the restaurant where she works. He rebuffs her advances at first, but then gives in after a few episodes.

It gave me the perfect chance to yell at the TV how inappropriate Daphne was being, and how many laws the chef was breaking given that he was kissing a minor. I’m sure Celeste heard me, but I don’t remember if she had much of a reaction. Teenagers can be funny that way, no?

“Switched at Birth” is the first show I’ve seen as a father that has given me the chance to talk about real-life situations with Celeste. I’m not sure if TV has been void of such shows in the last 15 years, or if Celeste just grew into them.

Either way, I’m glad to have the days of animated singing animals and explorers behind me for one of my children. I still have a few years of talking pizza slices and walking gumball machines to live through with Gavin.